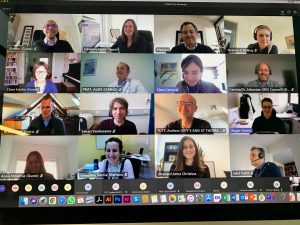 The kick-off meeting was held on 4 and 5 March after the official start of the project on 1 March 2021.

Coordinated by IRB Barcelona, Evomet seeks to train future metastasis researchers to apply the knowledge generated in basic research to the search for therapeutic solutions.

The Innovative Training Network (ITN) Evomet, funded within the Marie Skłodowska-Curie Actions call of the European Commission, officially started on 1 March and held its kick-off meeting on 4 and 5 March. Organised online by Dr. Roger Gomis, coordinator of the project and Group Leader at IRB Barcelona, the meeting gathered the principal investigators (PIs) from the 13 beneficiary institutions, together with the training partners and the European Commission project officer, to discuss how to guide the project to success.

The prevalence of cancer is increasing, with more than 3.5 million people affected in Europe, metastasis being responsible for the vast majority of deaths related to this disease. The European Evomet project, coordinated by IRB Barcelona, seeks to train future metastasis researchers to apply the knowledge generated in basic research to the search for therapeutic solutions. The objective is to leverage the development of drugs and, ultimately, have an impact on the clinical treatment given to these patients, who have the worst prognosis.

Evomet is a consortium consisting of 13 research groups, which include several of the best academic, clinical and industrial centres working in cancer and metastasis research in Europe: IRB Barcelona, the Josep Carreras Leukaemia Research Institute (IJC), the Research Institute of Molecular Pathology (IMP), the Institute of Cancer Research-Royal Cancer Hospital (ICR), the Institut d’Investigacions Biomèdiques August Pi i Sunyer (IDIBAPS), the University of Lausanne, the University of Cambridge, the Université Libre de Bruxelles, the Université Paris-Saclay, the University of Basel and the companies Boehringer Ingelheim, Intomics and ChromaCure. The network is complemented by six partner organisations, which will contribute to the training of 15 early-stage researchers (ESRs) who will become the future leaders in metastasis research.

An online kick-off meeting for an ambitious project

The kick-off meeting started on 4 March with a welcome and a general introduction to the project by Dr. Roger Gomis. He presented the main project goals and the work plan overview. All the work package (WP) leaders presented an overview of the WP tasks and deliverables. Afterwards, the PIs and future supervisors of the 15 ESRs presented their lines of research and explained the individual projects that the ESRs recruited will be working on. The consortium members had also the opportunity to learn more about the training and career development programme on offer to the fellows and to meet representatives from hfp consulting and Scienseed, the partners contributing to training in transferable skills during the 4 annual project meetings.

The second day started with an interesting talk given by Dr. Julien Giordani, project officer from the European Commission’s Research Executive Agency, in which he gave an overview of the MSCA-ITN rules and procedures. He emphasised the importance of ITNs in the training, career development and employability of young researchers and how these projects are an excellent way to gain experience in working collaboratively in large, interdisciplinary teams. He encouraged attendees to coordinate efforts to make a true impact and gave some tips on how to efficiently implement the project. This talk was complemented by a presentation by the Evomet project manager Dr. Clara Caminal, who gave additional information on the administration aspects of the project and the ESR recruitment process.

The meeting was an opportunity for all the consortium members to present their ideas and their vision of the project and set the basis for a fruitful collaboration in the coming 4 years. All members are now ready to recruit and welcome the 15 ESRs, who will be joining the consortium in August.

The hallmarks of the Evomet project

To prepare future leaders in metastasis research, Evomet has developed a multidisciplinary and intersectoral strategy, in which the problem of metastasis is approached from multiple angles and using a wide range of scientific methods.

During the 4-year duration of the project, the ERS’ will also receive complementary training covering innovative and creative thinking, social and interpersonal skills such as communication, entrepreneurship and innovation, research management, etc. thanks to the participation of Scienseed and hfp consulting, science communication and training agencies respectively.

The project is funded by European Union’s Horizon 2020 research and innovation programme under the Marie Skłodowska-Curie grant agreement nº 955951.